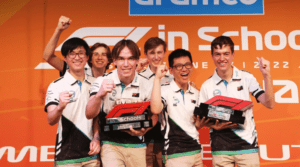 Team Hydron is a group of Melbourne high school students who formed a team for a STEM education initiative to build and race a Formula 1 vehicle, with the aim of competing in the World Finals. After winning the Australian National this team were invited to compete internationally, with 53 teams from 25 countries, at the World Championships. They won the competition in July 2022

There is no denying Formula 1 is intensive on the environment. The calculated footprint in 2019 w 256,511 tonnes of CO2-E. The current report and recent departure of driver Sebastian Vettel due to climate concerts, demonstrates the industry is understanding that climate action and innovation is necessity if the sport is to continue.

The team at Hydron contacted us prior to the competition to find out about calculating and offsetting their footprint, as senior high kids  environment is a priority and addressing their footprint was an important learning aspect of the STEM project

Our team figured that if we’re taking on the globe, we should protect it too. For the World Finals, we collaborated with Carbon Positive Australia to offset our emissions – from flights, to manufacturing, to the food we ate. Through our collaboration, we were able to become a carbon-negative project. This saw us reduce our carbon footprint to less than neutral so that we had a net effect of removing carbon dioxide from the atmosphere rather than adding it. This was paramount in our F1 in Schools campaign, made easy by Carbon Positive, as we sought to be part of the solution to global climate change, not the problem.

You can calculate and offset your carbon emissions for FREE here.